I Built and Published an iPhone App

Well, this is fun. A few months ago I got an idea for an app and a few days ago I launched it on the App Store. There are two productivity tools that I use to help me stay focused, which are the Pomodoro technique and brown noise. The pomodoro technique is a way to view work as cycles of focus and taking a break, and brown noise is a more soothing version of white noise that blocks out other noise and helps me focus. Either one works well on its own, but I had never once seen anything about combining the two, which is what I wanted to do. Around the same time, I read a post on Indie Hackers about someone who built and released an app on the App Store. I wish I still had a link to the post, but he basically said that he built a small app, launched it, and came back a few months later to realize that he had some users that ended up appreciating his work. I was inspired by his post, so I started building a mash-up of my two favorite productivity tools. I had never written an app much less used Swift or Objective-C before. After a few late nights and a few months, I finally came up with a product. Along the way, I had some friends and family buy into my idea and support it. I gave them early access and tweaked the app according to their feedback. Soon enough I had approval. I went down the path of launching it on the Apple App Store so others could use it too. I filled out some paperwork, wrote some copy for my app’s page, and polished up my submission. When I submitted for review, I crossed my fingers and waited to hear back from Apple. Only a few hours later, and I had their approval. I am proud to say that I have developed and launched an app! I welcome everyone to try it out. It is called Pomodoro Noise and is currently available for the iPhone and iPad. I have plans to also release a similar app on Google Play shortly. 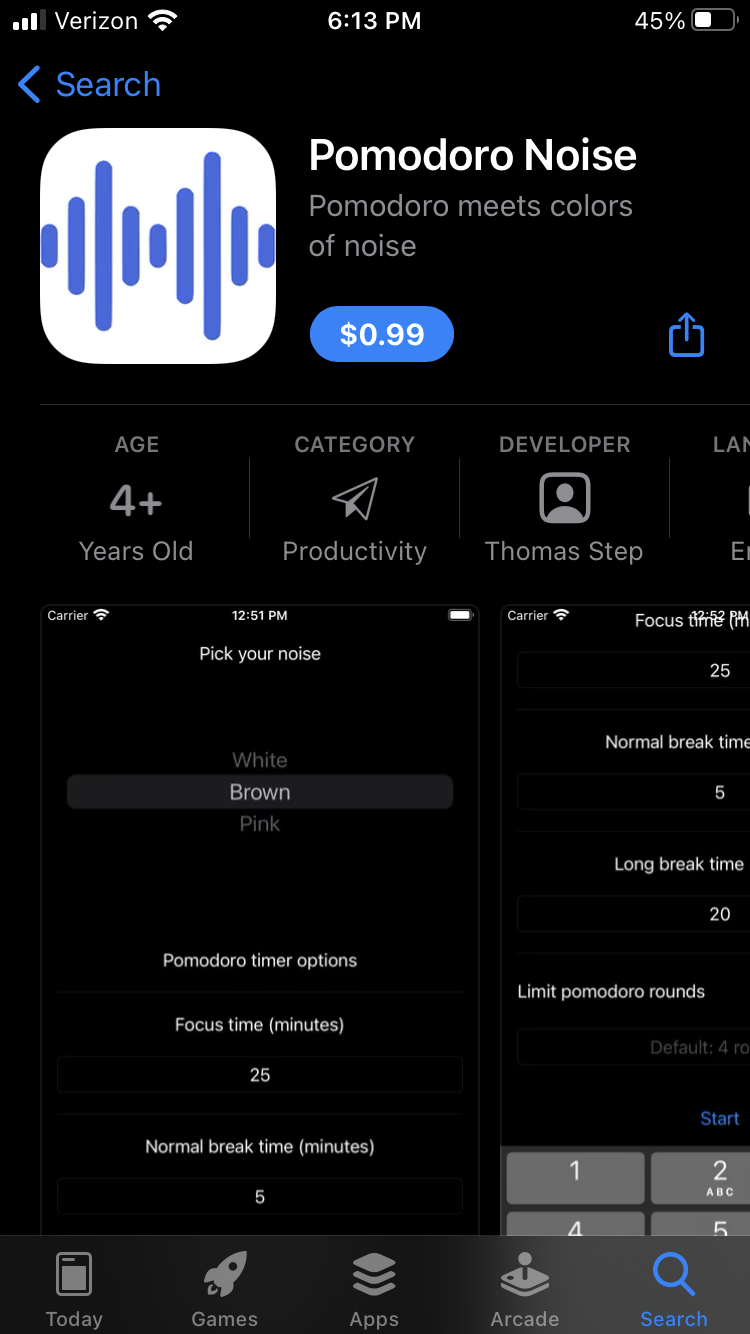 I learned a lot about what it takes to put an app up on the App Store. There are guidelines, paperwork, and a quality review before an app is accepted by Apple. There were some hoops I had to jump through, but ultimately, I am proud of myself and my work for being accepted by a company known in our industry for high engineering standards. Another fun takeaway from building the app was learning Swift. While I didn’t get too deep into the ecosystem, it was fun to experiment and learn a few nuances of a new language and system. I am sure that this won’t be the end of my app developing career, and I am glad that I had such a positive experience the first time around.